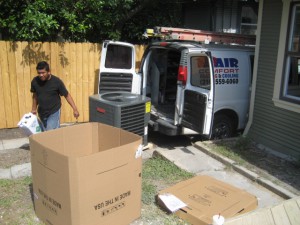 Finding sub contractors is a huge key to your success when flipping houses. There are 2 kinds of contractors, General Contractors or GC’s, and Sub-Contractors. Most investors hire a GC who then brings in his own sub-contractors, oversees all their work and tacks on about 30% to your price.

This works great for people who have little construction knowledge or simply don’t want to spend the time ordering materials, checking in deliveries, writing checks on Fridays to subs and overseeing work. San Diego house flippers usually have their own crews that they guard with their lives. Once you get good guys you never want to refer them to anyone.

My feelings are that most investors are doing this anyway and basically acting as their own GC so shouldn’t be paying for one. Homeowners these days are even acting as GC to save the 30% and hiring subs themselves while building their new home. There’s even a national company called U-Build It that sets you up with the list of subs. So, the key to the savings is finding the subs and managing them yourself.

Most people think that you have to be a licensed general contractor to pull all the permits on a major remodel when in fact you don’t. The owner of the property can pull the main building permit, as far as the other 3 licensed trades go, your subs will be responsible for those permits anyway. The 3 licensed trades are electrical, plumbing and HVAC. All other sub contractors like painters and tile setters could be licensed.

So, how do you find these elusive inexpensive sub contractors while there are so many overpriced flaky ones out there? I’ll share with you how we’ve done it in the past. In 2006 we moved to a strange city to flip houses and didn’t have one single contact.  After being in San Antonio only 3 days we bought our first house and it was a major full gut rehab. On this project I didn’t use one single Yellow Pages contractor, we found great deals for everything.

Call me crazy but I knew that I was resourceful and could get it done, after all this is really what its all about, being resourceful. Don’t use contractors out of the Yellow Pages, you’ll be paying about twice what it should cost to a savvy investor or builder. There are 2 price levels, homeowners pay retail “yellow page” prices. Remodelers, home builders and investors pay wholesale prices. You need to convince your sub that you are on the same level as the big builder he works for so he gives you the same price. Promise him regular work for a start and try and do your homework and at least appear knowledgeable.

The Referral Method The best way to find a good sub contractor is of course through referrals. If you happen to know other local rehabbers ask them if they’ve got anyone who’s worth referring. To a certain extent these subs are disposable. After every remodel I do there’s probably 6 that I hate, 4 that finished as promised and only 2 that I’d use again so you constantly have to be interviewing and trying out new ones. Always be asking other rehabbers who they use but also keep in mind, someone who does a good job today doesn’t always do a good job next month.

Also be careful of the subs who then sub their work out, this is a disaster waiting to happen. Typically when a sub gets busy he’ll try and send a friend in his place and still make a cut of the job. Remember, all good subs stay busy so watch out for this trick. You might find a reluctancy for other investors to share their guys so don’t be surprised. I personally wont for multiple reasons, 1 being that when these guys are starting out you get great pricing. For instance, I was getting $2500 rewires from an electrician here in San Diego until he got established and then his prices went up to $7800. You constantly have to be talking to new guys and looking for better deals. Not only can you ask other rehabbers but you can also ask other subs.

Say you meet a roofer, ask him if he knows a good framer. Be very careful though, its common place that laborers know a little about everything. You can really get screwed like this, typically they’ll start asking you who’s doing this and that for you. I have an investor friend who also moved to San Antonio and didn’t know anyone. Turns out he fell for this when his roofer looked around and noticed the floors needed refinishing and said “Who is doing your floors?” I’m a re-finisher the guy stated, I have my own machine and everything.  His price was good, my friend didn’t know anyone else so he went with it.

When he came home after work to check on the job and saw the Home Depot Rental Department sticker on the sander he knew he was in trouble, needless to say the floors didn’t come out right. I know I just told you that referrals are one of the best ways to find a contractor but one of the famous tricks that guys out there are doing is looking around your house, seeing what else needs to be done and then claiming they are an expert at it so be careful.

The Trespassing Method One of the ways I pulled off that huge remodel in a strange city was walking into big remodels and asking for numbers. Home builders and large scale remodelers use reliable people and get great prices from their subs, these are the guys you need to find. As you are driving around if you see a big remodel going on its pretty easy to tell what stage they’re in. If they are framing, drivel up and get the guys number. If the plumbers truck is there or an electrician van its easy to spot. There is a City Code that states these subs’ trucks have to be clearly marked and include their license number so to me that’s an open invitation.

Be careful, if the GC is there he could get irritated that you are getting in on his bread and butter. The subs working will be glad to get the extra work, don’t hang out and ask for prices, just in and out real quick and have a pen and paper handy. You can negotiate later when they come bid your job. You can find everyone needed to do your job if you revisit the home as it progresses along. New construction guys are usually the best to find as these big neighborhoods are open and there’s rarely GC’s on site.

The Spy Method Any new construction or remodel is going to have permits filed at the City Hall.  You cant find tile guys, drywall guys or painters with this method, only the big 3 licensed trades. In my town this info is in fact online and free to look at, even if you are not the homeowner. You can search building permits by address so say for instance you see a great flip going on in your area, just go online and get the 3 big subs contact info. I call and say I know they did the plumbing on such and such street and want a bid on my project.

The Parking Lot Method I’ve had success finding contractors in Home Depot parking lot. I usually scan the other trucks every time I go there and if a guy looks cool I’ll chat him up. The best electrician I’ve ever had I found there (the guy who was doing $2500 complete re-wires). It’s been said that you only want the guys who are there early, that way you know you are getting a hard worker. The guys who roll in at 10 am after the taco shop are usually not worth the time. Of course you have to be careful with any of these methods, you never want to prepay anyone, always use contracts and the pay as you go method.