This is the 3rd house in a row we’ve done in Mahncke Park this year, hence the name “Hat Trick.” This house was vacant and owned by out-of-state heirs to an estate…another non-MLS purchase for us for $148,000. The house is on Thorman Place and was built by renowned San Antonio developer and oilman H.C. Thorman in 1900.

It’s the oldest house in the Mahncke Park neighborhood and being on “his” street we had a feeling it was his personal residence. After the success of our last project one block over, The Craftsman Bungalow, we were excited to take this charming house to the next level by adding square footage. I totally redesigned the floor plan on the house by opening walls, moving doors, deleting rooms, creating hallways, laundry room and adding a 480 square foot master suite room addition to the back.

We took this 1450 square foot 2/1 and turned it into a 1930 square foot 3/2. All the mechanicals of the home were also replaced including complete electrical wiring, roof, foundation, central air and plumbing. The original wood floors remained and were refinished dark although we had to patch in new areas as needed after moving load bearing interior walls.

We took extra care to preserve the exterior historic look while updating the inside to today’s most discriminating standards. One potential buyer actually teared up as she was so moved by our work on this project. After receiving multiple offers even before the house was complete, we ended up selling it in 5 days for $340,000 and avoided paying realtor fees by procuring our own buyer.

We really set a new quality standard for our area with this remodel, the home inspector hired by the buyer could not call out a single issue with the house and it also sold for 50k higher than any comparable.

In June 2010, this great home was featured on the front page of the San Antonio Express-News Real Estate section in a story called “Great Pairings” about historic homes with modern interiors. 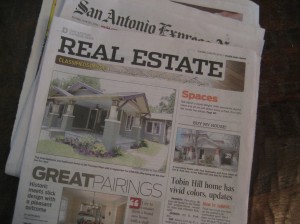 Full Before & After Video