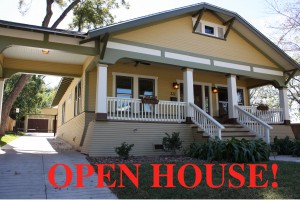 I’m sure you’ve heard this before, maybe even from me. “Open Houses dont sell houses, agents just use them to find new buyers.” Although I love this saying, I have infact sold a rehab from an open house before so it’s more of a generalization than an absolute. With this being the slow time of the year we were determined to get some live bodies through The Target House. If we were in Spring or Summer we’d likely have seen some offers by now. This house sells itself, so it’s just a matter of increasing the traffic. To heat things up a bit last week I dropped the price $20k, we’re not playin’ around here guys and San Diego is waiting. After talking to my ad rep at The San Antonio Express-News classified department I learned there was the City-Wide Open House Edition this weekend in which they run color photos of the homes for you both Saturday and Sunday. I had this great idea to contact the listing agents for the other 4 houses for sale in our neighborhood and get them all on board with me and even had the newspaper agree to running our ads all next to each other to increase the impact. Needless to say none of the other agents took me up on it, even for the measly investment of $129.00 for both days. It’s cool, I’ll be drinking a Corona on the beach in S.D. and their listing will still be sitting there unsold. It still amazes me at how slow the local agents are compared to real estate professionals out West, maybe it’s the size of the commission checks, the heat, I don’t know but when it comes to getting something sold why not try everything possible?, especially after what we went through to get to this point. Without the other agents on board I was still able to work some magic and get my ad front and center, smack dab at the top, #1 spot for both days.

The turnout was great, between both days I had about 50 people through, including some agents, a neighbor, a historic home buff and even another prior owner of the home. This guy is probably 80 years old, he actually flipped my house in 1978. He bought it for $21k, his brother built new cabinets for the kitchen, they painted the whole inside white and resold it 4 months later for $42k. Great story. Yet more history from this house, and also goes to show people have been rehabbing houses forever, you just never heard of it until all the TV shows came out.  He spoke of missing items which included a huge crystal chandelier that was in the dining room, my bookcase leaded glass doors that are now missing and a built-in buffet with beveled glass that used to be on the dining room wall, all of which are long gone by now unfortunately. We have another showing already scheduled for Monday which I have a suspicion could be an open house attendee coming back with their agent for a second look. After all this work in getting people through the house it’s important to have them leave with something, a little momento if you will. I made some quality color glossy card stock flyers and attached the mls printout and floorplan to the back to ensure they had something to refer to, and all the info they needed, if they were the slightest bit interested in buying. This is another tool I dont see getting utilized here by the agents in Texas.  All in all, the open house was great success, tons of incredible feedback as everybody was just floored by the remodel and getting 50 live bodies through the house might have just givin it the exposure it needed to get something in writing soon.  Thanks for following, here’s some parting factoids for you to ponder:

3. Houses are not sold, they are bought.