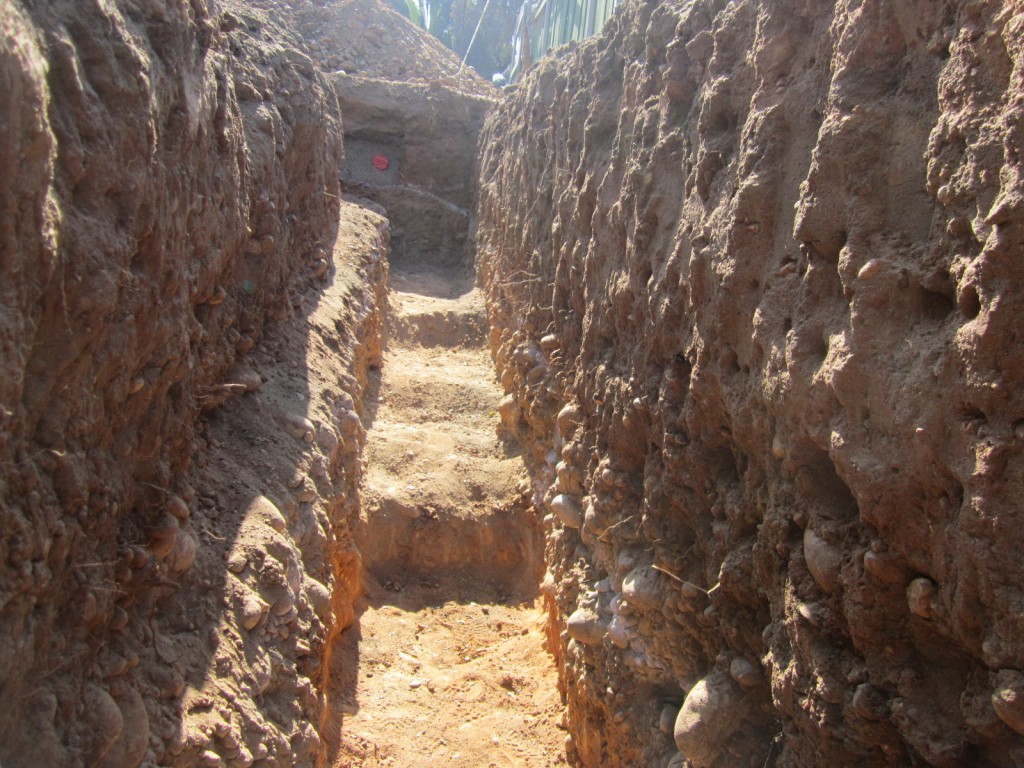 While the City of San Diego only requires footings for a 2 story house to be 18 inches deep, went close to 5 feet in some spots. You can see here that the bottom of all my trenches remain level with steps, so gravity doesn’t take our house down the canyon. The reason the footing trenches vary in depth is due to the distance to reach native soils. No lot is perfect, in our case with this house one main challenge besides having the rear 30% unusable due to the canyon is unstable fill that’s been there for years. The only alternative to digging all the way down to native soils would be to have the whole site compacted to 90%. I could have done a slab on grade at that point but at the end of the day I felt this way will be the most structurally sound. While these deep footings will eat up expensive concrete at $95/yard, a slab on grade foundation would still need deepened grade beams and since the lot slopes down towards the back, the foundation is 3 feet high and end up being about the same amount of concrete. Note the existing 4″ sewer lateral ready to go. 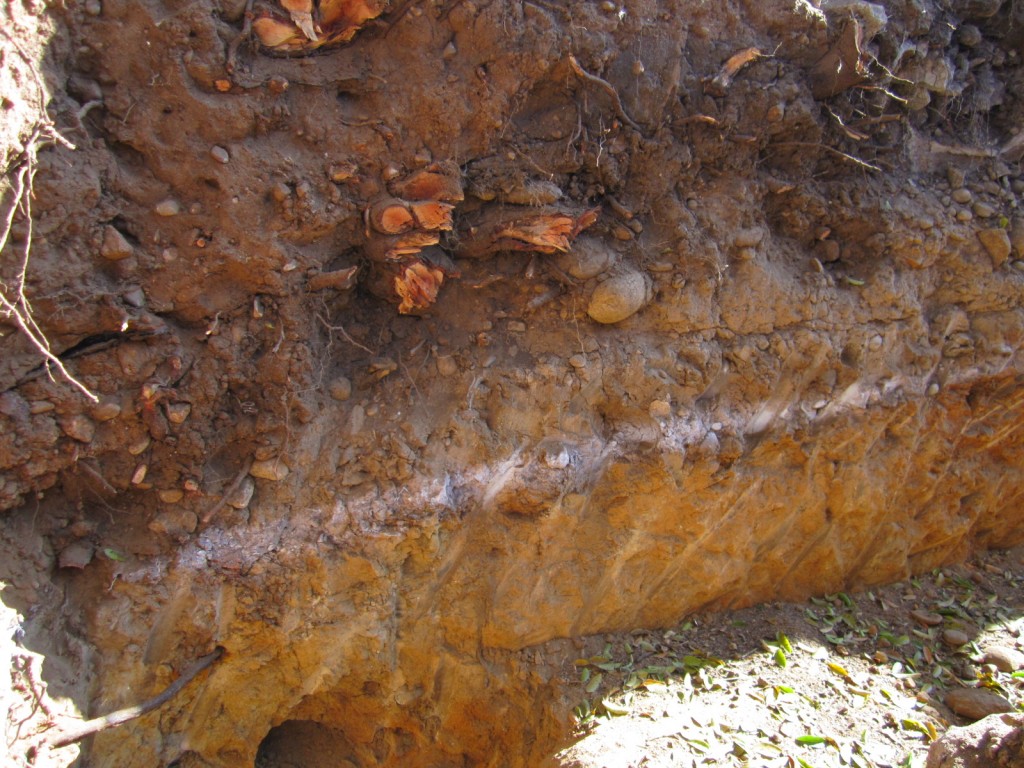 The excavator we rented made quick work of the foundation dig but after the soils engineer came and inspected our footing trenching, he requested us to go farther into the native soils. You can easily see here where the brown, silty cobble fill changes to a rock hard gold color at my spray paint line. This stuff is so hard to dig we used a jackhammer for 3 days to deepen the trenches to satisfy the soils engineer. He’ll now give me a certificate which I’ll hand to the City inspector when he comes to inspect the foundation forms and rebar placement. As previously mentioned, you could roll the dice and not have a soils test but if the City inspector feels there is fill he’ll make you take all the forms apart and get the report anyway. I want to build it right so in my mind this is the only way to do it. 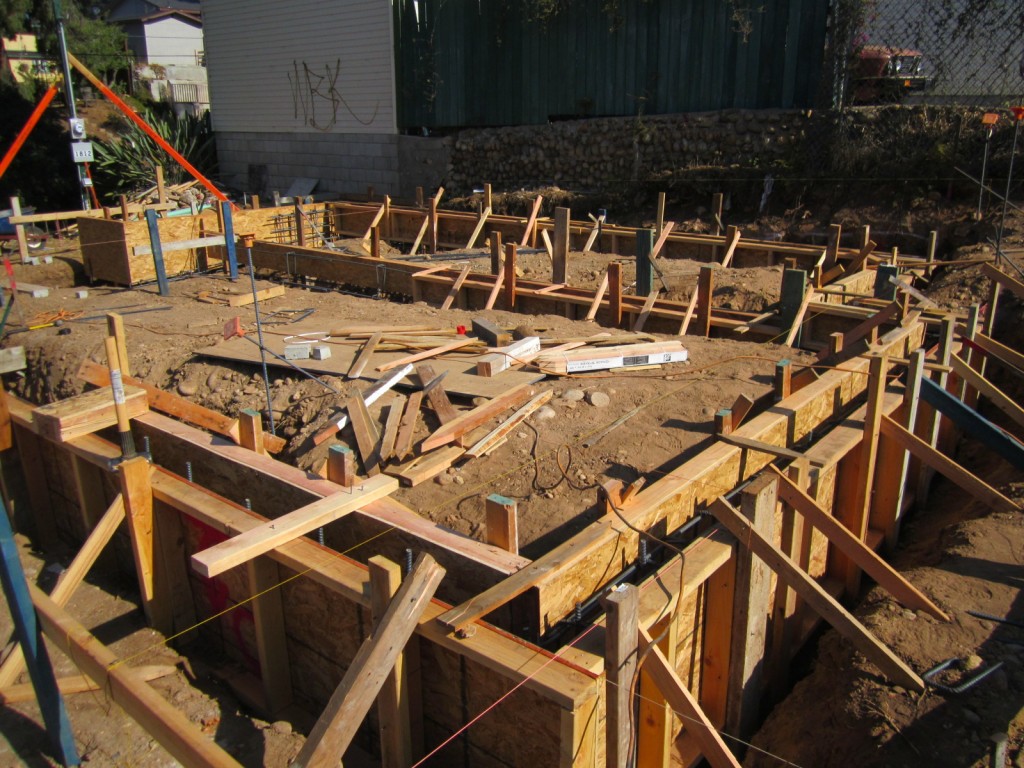 The first step in forming a raised foundation is pulling some control lines from which you can set your exterior forms. We build them all with 2×4’s and OSB, setting the outside of the house footprint first and then starting with hanging the rebar inside. All rebar has to be 3″ away from dirt or forms. Finally after cleaning out and debris that might have fallen into the trenches you then set the inside form. After inspection we’ll pump concrete in from the top. 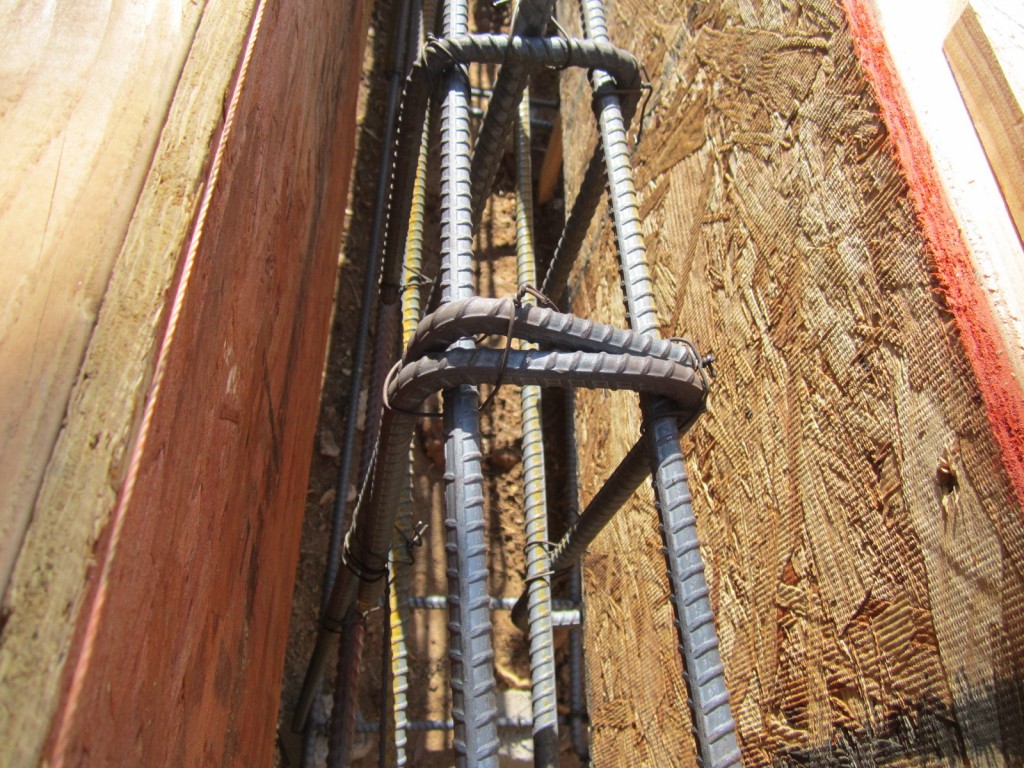 Once again the City only calls for (4) 1/2″ horizontal rebar inside the foundation with vertical bars 24″ on center.  For just a little extra cost I upped the ante to (6) horizontal 5/8″ bars with verticals 16″ on center. Raised foundation houses in California have this exterior stem wall. In the interior of the foot print the load is typically carried by4x6 treated sills that the floor joists rest on. These beams usually sit on posts and piers. My raised foundation design is far superior with one more stem wall running down the middle of the house like a spine. I’ll be using TJI floor joists which will span the whole width of the house without any posts and piers. We’ve fixed so many foundations on old pier and beam bungalows, with this method you’ll also have the convenience of a wide open crawl space to run mechanicals without any posts in the way. A little extra cost but by far a superior design for a raised foundation. Most of the neighbors have stopped by now, its the talk of the street that something is going up on “old man Fred’s” lot. I’ve been extremely respectful to everyone, even buying car washes for neighbors whose cars got dusted out by all the digging. I also rented a construction fence with privacy mesh so no one has to look at the mess all summer. We should be done with the forms mid week and then we’ll get started with the underground plumbing that needs to go in before we pour concrete. Stay tuned, once I get past the undergrounds and pumping this foundation it will get framed up real quick.