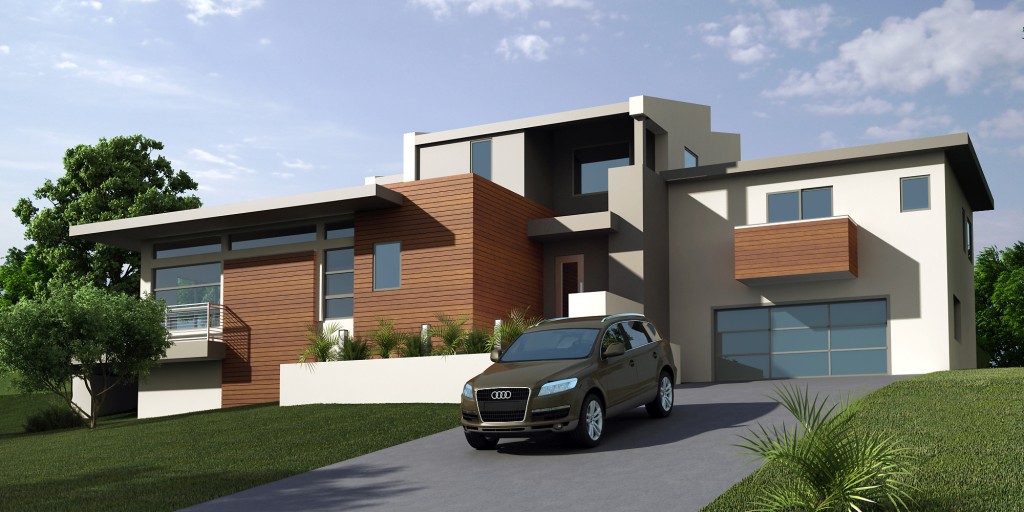 Making some headway with the Carlsbad Lagoon project. I’m still dialing in materials and colors but we are making progress. The building site continues to be quite challenging so the house design has changed several times. It’s currently a 4,051 sf 4/3 including an attached 678 sf 2-car garage.

The City of Carlsbad has some restrictive building height requirements for the Coastal zone. Flat roofs have a height restriction of 24′ and pitched roofs with minimum 3 and 12 pitch are allowed 32′ heights. Of course I originally wanted all flat roofs, but in order to get the second story and still have 11 foot ceilings on the first level, we had to go with a pitched roof up top because of the existing slope creates a big crawlspace under the front.

The height is measured from the lowest, or most restrictive, between proposed and existing grade. We are the home buyer in Carlsbad. 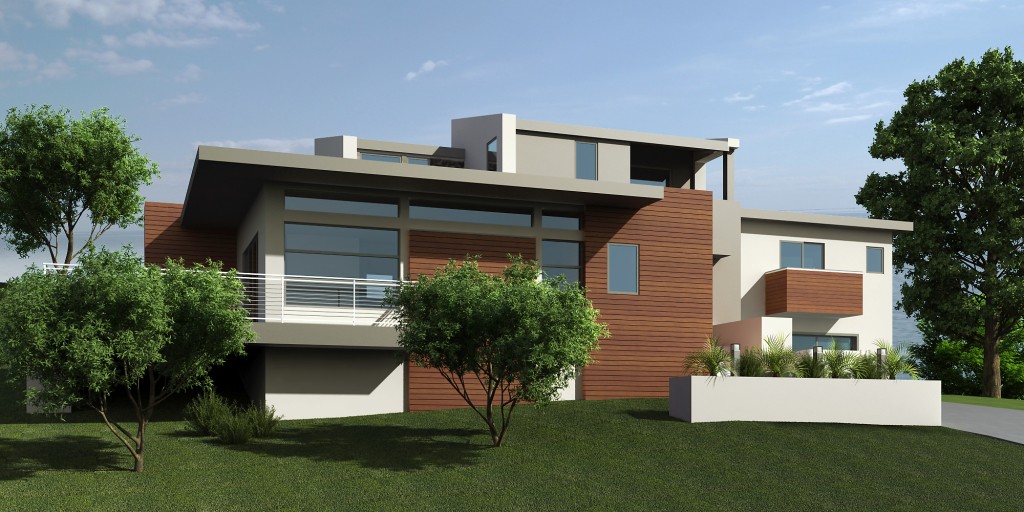 The materials used will be stucco, wood and metal, there is a great overhang that wraps 2 sides of the living room, which will have an under lit wood soffit. Generous use of windows on the front will bring in an ample amount of light while the 5′ overhang will filter the harshest mid day Southern exposure from direct light. The large living room is connected to the outdoor deck with fire feature via a set of aluminum La Cantina accordian doors. 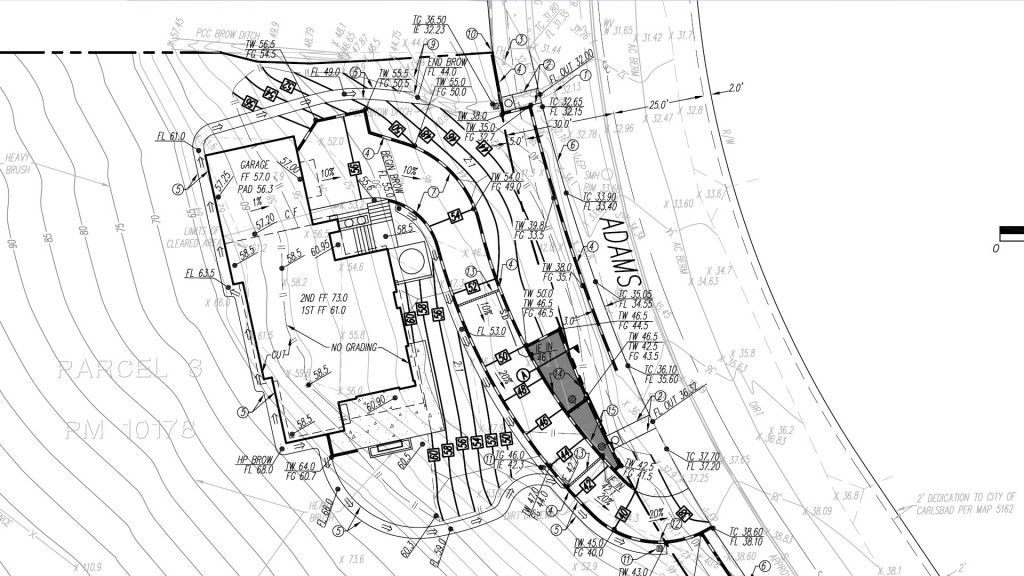 You can see here how much civil engineering work has been done just to get the structure to work on the lot. The correct driveway orientation can be seen here. I’m real happy with how the grading plan worked out, the rear 1/3 of the house and half of the garage is cut into the hill and will be slab on grade while the front of the house will change to raised stem wall foundation.

There is a new sidewalk, curb and gutter public improvement for the entire lot frontage, as well as a Bio Retention system engineered into the landscape plan that filters all driveway and roof run off before hitting the public street.

The retaining wall elevations worked out pretty nice with the lot topography and the civil engineer did a great job designing it to minimize grading. On the high side of the driveway its only 3 feet tall.  The driveway comes up pretty steep off the street at 20%, then levels off to 10% as you get up near the house.

We left enough room at the top of the driveway to turn a car around so nobody has to back down onto the street. In total we have 220 cubic yards of cut, 900 CY of fill and about 700 CY of export so we should qualify for a minimum grading permit. The City basically wants to see your house design stuck into the hill and minimal impact to the rest of the lot. 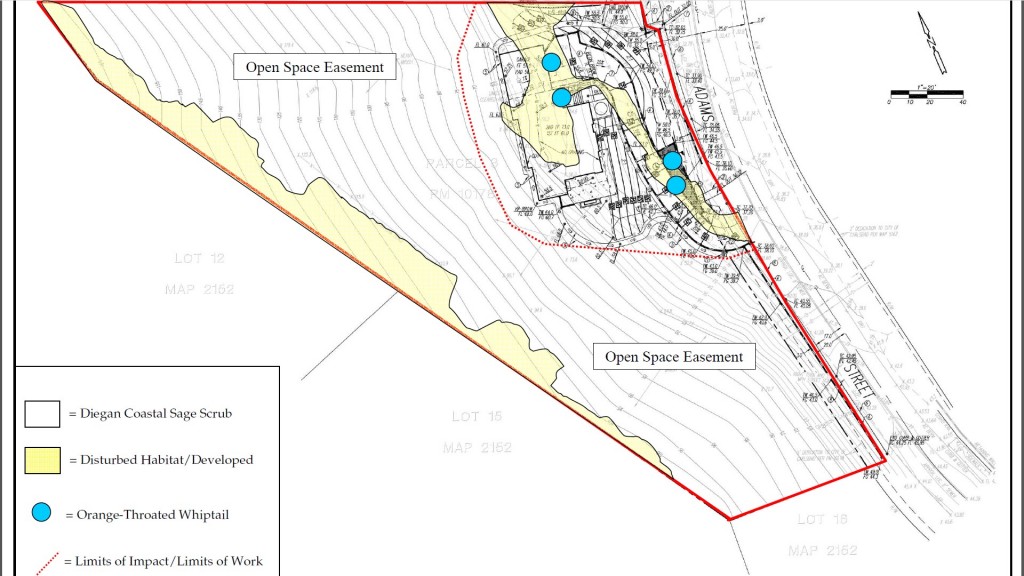 We had a pretty favorable Biology report, the absence of California Gnat Catcher birds during the site survey by the biologist really alleviated one of my big concerns with the parcel. There is however Diegan Coastal Sage Scrub that is all over this hill and its on the endangered list.

In order to remove some scrub brush (mitigate), you have 3 options;  dedicate the rest permanently with an open space easement that will eventually get recorded to the title, pay mitigation fees, or mitigate off site. To mitigate CSS it would cost roughly $30,000 per acre so this mitigating on site with the easement is a a great solution. Because we are only developing 25% of our 1.3 acre lot, dedicating the rest permanently will prevent future homeowners from developing the hill.

It’s steep anyway so there’s really not much you could do with it so its not much of a downside in my opinion. The open space will provide a nice buffer between us and the neighbors and continue to be a valuable wildlife habitat. You’ll notice the blue dots where the biologist found the Orange-throated Whiptail lizard. While on the endangered list, its not as critical as the Gnat Catcher Bird would have been.

The only stipulation is that we have to perform scrubbing and grading activities to the site in the breeding off season between February 15 and August 31. The whole project is being reviewed by the City now, if we get a favorable response we’ll move forward to the Coastal Development Permit then Grading Plan and construction plans with the structural engineer. All this red tape makes some people want to sell their Carlsbad home. We will purchase it as-is with no realtors if it is outdated or older condition.

Do you have a headache from all this? Me too. California red tape. Green Button Homes buys houses in Carlsbad, Oceanside, San Marcos, Vista and Escondido. Call/Text 619 438-0234 to Sell Your House Direct Now!