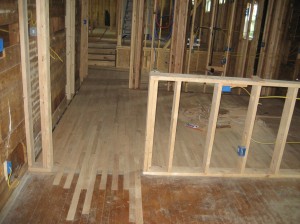 I picked up 1200 s.f. of hardwood flooring last week from Home Depot and we got started putting it down. On a full gut rehab I always put down the new wood floors before hanging drywall (if they are unfinished).

We patched into the dining room, staggering the joints and have run the new 2 1/4″ unfinished Red Oak all the way through the kitchen, utility room and we are half way through the master bedroom. In the old portion of the house the wood nails right to the floor joists but in my new addition it nails to the plywood sub floor with some felt paper in between as a moisture barrier.

Most of the Craftsman Homes in San Antonio originally have Red Oak flooring but occasionally you’ll see Long Leaf Pine used and especially in kitchens. After some deliberation I decided to have all hardwoods in my master suite instead of using high end carpet for the bedroom and tile for the bath floor.

On the last couple of houses I used carpet and didn’t really hear any complaints but these Arts and Crafts style homes are really all about having hardwoods throughout. By the time I looked at what I would spend on the carpet, tile and installation it made more sense to just put down all wood and I’ll end up with a way finer product.

Like the last house, I’ll even run the hardwood floors through the master bathroom which got great feedback and will really give my new addition some character. I usually buy this flooring at Lumber Liquidators for $1.99/s.f. but their price went up to $2.89 now.

Home Depot has it for $2.39 plus I got a little bit more off the order since it was over $2500.00 we got to send it to the bid room.  I’ll still have to have these floors sanded and refinished with the rest of the house once the renovation is complete but on the flip-side putting down a prefinished engineered wood just wouldn’t give you that old house feel. 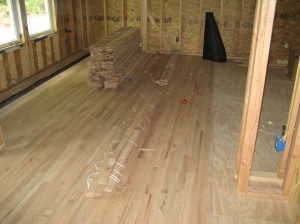 I’ve been doing extra dark stains like Dark Walnut & Ebony on my last few projects but for this house I think I am going to go lighter with Golden Oak just to change it up.

The dark floors are really trendy right now and very dramatic but they get so dusty and are a nightmare to keep clean during the period the house is on the market for sale. When the flooring got delivered the driver didn’t show up until 7 o’clock. Wouldn’t have been so bad but he dropped the pallets curbside so I had to lug all 63 bundles up 15 steps myself after a long week. 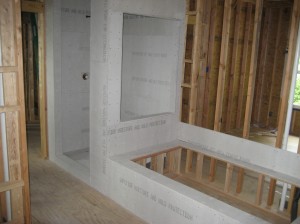 Here’s another item that I always do before the house gets drywall, I install all the HardiBacker in the areas that I have planned for tile. In the hall bath (not shown) I am doing the floor and tub surround. In the master bath pictured here I’ll do the entire new shower all the way up, inside and out of the 9 foot walls, and the box for the spa tub with a mini surround.

Before the backer board could go up I had to do the shower pan.  I use the rubber membrane and a dry mortar bed and slope to the drain. It takes about 2-3 hours to complete. The backer board is easy as well, it cuts great with a skil saw and goes in with tons of screws.

You want a real stable base so your tile job doesn’t crack. I’ve seen some remodelers using that blue board the sell at Lowe’s, don’t do it, your tile job will crack in a few short months! That would suck to have your flip on the market for sale and a tile job start cracking. I’ve seen it happen, multiple times. Always use 1/2″ HardiBacker and screw it down, even if the guys on DIY Network nail it.

The skies cleared and the inspection gods have blessed our project. Finally, we passed all 3 rough-in inspections. We had to have the mechanical inspected twice and he almost failed me the second time because I had the incorrect tape on the joints of the dryer exhaust vent. The correct taping for the seams is the UL rated aluminum tape with the red letters, same as the A/C guys use. After some word games and a battle of the egos he busted out the green card much to my relief. It always seems the young inspectors have such a chip on their shoulders while the old guys just roll through, pass you and start talking sports and telling stories. Since I pulled the main building permit myself as the owner/builder then I am in charge of the next 2 inspections. First I’ve called in for framing inspection Monday for which the City of San Antonio will look at the placement of the fixtures with relation to each other, framing and construction as well as fire blocking of all penetrations from wiring and plumbing and foaming of the windows. Once I pass this framing inspection Monday I’ll be free to hang the insulation and call in for insulation inspection for Tuesday. If you hire a company to insulate your new construction they will furnish you with a certificate that will satisfy the city but because I am such a penny pincher I hang it myself which thereby requires them to come inspect. I buy the insulation wholesale saving about 30% from what Home Depot or Lowe’s charge. Once I pass insulation inspection I am finally free to drywall! Yea buddy, whew! You’ll also see on the video update that I’ve trimmed out the front porch and removed all the kitchen hardwoods due to old water damage and poor patching. I need to get the new wood patched in also before drywalling the kitchen but that won’t take long. The original wood floors in my house are red oak, which is still available through lumber liquidators for .45/ foot. All 330 feet of wood I am replacing only cost me about 700 bucks. Once the floors are refinished you wont see the patches. I am planning on the dark walnut stain again since they seem to be so trendy now. Stay tuned; next time you see the house it will be all sealed up. It’s a big milestone, what was previously stick framing all of a sudden becomes recognizable defined spaces.

When my wife and I first moved to San Antonio 2 years ago an insurance agent told us the city’s nickname was “Land Of Mañana.”

We’ve found this to be totally true, it seems most workers are satisfied to poke along and only do what’s necessary to keep their family fed and stay semi-busy. Oh, I’ll just finish it tomorrow seems to be the consensus. Since the cost of living is low here there’s really no sense of urgency to get anything done.

Although we do most of the rehab work ourselves there are still sub contractors who we depend on and recently we’ve had our pace slowed down a bit.

The foundation guys disappeared for a week after there was a water leak under the house and things got a little muddy. You can’t lift the house to level it if it’s muddy because the hydraulic jacks will sink on you.

I had the meter off but it turns out it was faulty so some water was getting by even though it didn’t show it. I had SAWS come out for free and replace the water meter so we are all dry now and the guys finally got the house level and are almost done. 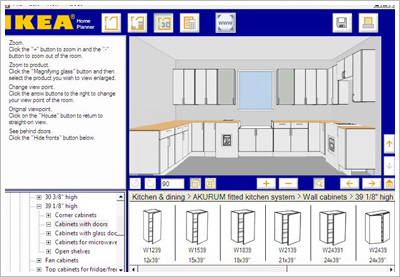 The design of the kitchen cabinet layout is complete thanks again to our Swedish friend’s website. Last time we wrote that we had some people email us and ask who our Swedish friend is…for all of you who don’t get that joke our friend is Ikea! Yuk yuk yuk.

The design required us to remove the 3 existing kitchen windows and put one back in with a new location so it’s centered over where the sink will be. 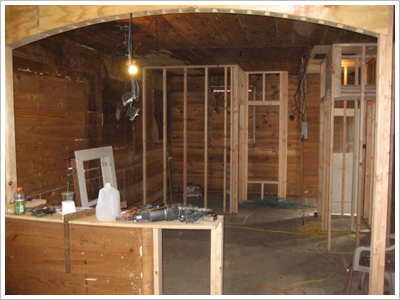 I finished the entire interior framing this week so the new laundry room, hot water heater closet, refrigerator cubby, food pantry, hallways and relocated doorways are all complete. I also patched the wood floors with Red Oak in the areas where I opened up interior walls. Once the floors are refinished you won’t be able to see the patched areas. 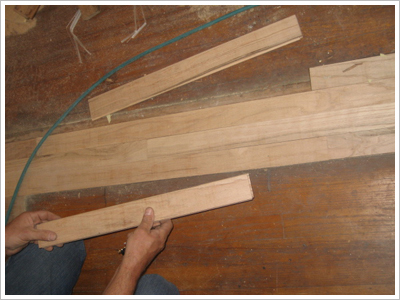 We are ready to start on the master suite room addition this week. To prepare for the room addition I had to get a 60-foot pecan tree taken down and then grind the stump down. I got a great deal from some guys to take down the tree but once again they only seemed to want to work half days and spread out a one-day job to 4 days. Getting rock bottom prices from subs is a key to our success but sometimes it slows you down a bit.

The room addition is 29 feet long so I also had CPS Energy come out and move the gas meter from the rear of the house 30 feet back in the yard. This only cost about $200, which I though was surprisingly cheap. They kind of have you over a barrel when it comes to moving their equipment so they could really charge what they want.

CPS is really easy to work with here in SA. They even came out for free when we dropped the big tree and took down the power feed to the house to make it easier and safer.