While working on the Hat Trick House this summer we were networking with all the neighbors and thus landed our new project right next door, appropriately tagged: The Neighbor’s House. Had I hired out all my remodel work like most investors and not been on site everyday working I wouldn’t find these bonus deals. Just like last year when we flipped the Craftsman Bungalow one block over and found the wholesale deal across the street for 50 cents on the dollar, Bungalow 2. This shows that it pays to network with the neighbors and keep your eyes open when you are doing your rehab. Our farm area is virtually a hotspot within the San Antonio real estate market and there is literally no inventory in MLS, much less an abundant supply of fixer-uppers with enough upside to fix and flip. This is our 6th non-MLS deal in a row, which demonstrates two things, the first being, the best purchases are the ones not in MLS and when there is little or no competition and the second being that you can always find a deal if you are willing to go out and get it. It’s kinda like fishing; you wouldn’t expect the fish to jump in your boat, would you? If you are a serious investor you cant rely on working with Realtors and buying stuff from MLS. You have to leave your cave, go out and kill something and drag it back. 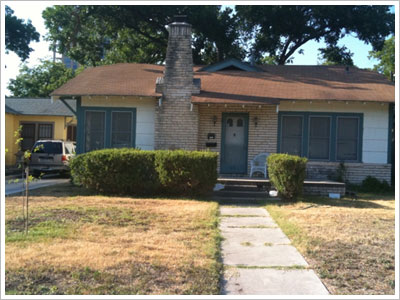 Directly next door to Hat Trick was a nice little bungalow with an elderly single lady who had expressed interest in selling to us one day. That day came sooner than later when she called me just as we were wrapping it up next door and asked if we could move forward. We actually signed the contract with her the day we closed on the Hat Trick House sale so the timing couldn’t have been more perfect. Furthermore, being given the opportunity now to have another investment property right next door to the highest comp in the whole neighborhood that we just finished will allow us to use Hat Trick as a sales comp when we go to sell this house later this year. This new project will also be a complete gut remodel down to the studs with added square footage. It’s currently a 2/1 so I’ll be adding another bathroom and new master bedroom addition with walk in closet in order to get top price on the resale. Our biggest challenge on this project will be designing the master suite room addition to wrap around a huge 100-year old pecan tree in the backyard. As luck would have it, it’s smack dab where ideally we would have the room addition. Taking down a cool tree like this is taboo so we are going to work hard to design around it as long as our floorplan doesn’t suffer. As you can see the façade of the house is in need of some help, I have big plans for a new front porch and gable with new craftsman style square columns and all new historic waterfall siding to give it the charm that everyone is looking for while keeping it historically correct. We are also helping the seller move into her new house this weekend as a good deed and expecting to start demo Monday so stay tuned for more rehabbing fun! 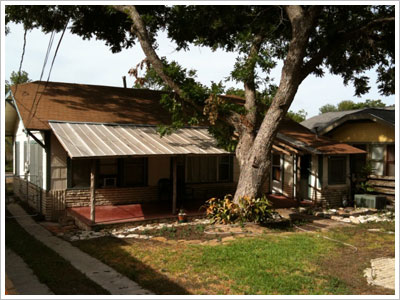