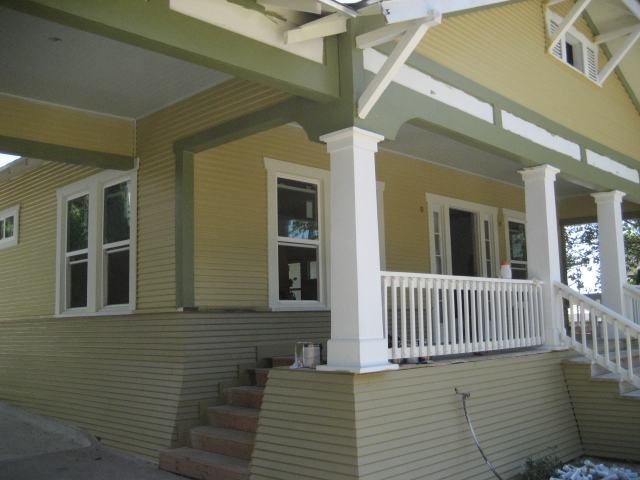 After all that hard work prepping the house we finally started putting some colors up this week. It’s really an honor to get to spray it after all those hours of sanding. We squeezed 117  tubes of Alex Plus 35-year caulk into every crack known to man, my finger tip might never recover. And of course I had paint samples visible, so the unsolicited comments from neighbors started flying.  It’s amazing how people aren’t shy to tell you they don’t like something.  On a previous house we did, my wife and I had about 10 samples up on the front trying to decide what looked good. This was back in the day before we used a professional to guide us. Upon arriving the next morning I found that all the neighbors had “voted” in chalk on the sidewalk. What the heck, I mean they are the ones who’ll have to live with it after I’m long gone but mind your own business people! I learned long ago when house flipping don’t piss off the neighbors so I try and bite my tongue now. You can see here we’ve got 5 of the 7 colors up already. I know it sounds like a lot of colors but really its only various shades of brown and green. These historic homes can handle a lot of color easily as well but most homeowners would be frightened by the thought of using that many. I think when you see the finished product you wont even realize there’s 7 colors. The last color is going to be the most dramatic so I’ll show you guys as soon as it’s done. It’s going on the knee braces, barge rafters and each individual rafter tail will also be hand painted. A lot of work but it’s going to be crazy when it’s done. I also have the original 1923 window screens that I’ll be painting and hanging back over my new windows, this always gives such a killer detail in the color blocking. In the pic here the columns and porch railings are still in primer. The ceiling for the porches on historic homes are always painted light blue. This keeps wasps from building nests and it really works!

I’ve switched helpers now, my last guy who helped with all the prep started to look  like he was going to pass out. After going home last week at lunch from being too tired I decided it was time for the second shift. My new guy is super pro, he’s been painting for 30 years and I’ve used him before.  After we are done with the outside this week we’ll roll straight inside and start catching the interior up. I’m still trying to pick granite and tile colors but for sure I’ll be going white shaker style on the cabinets.