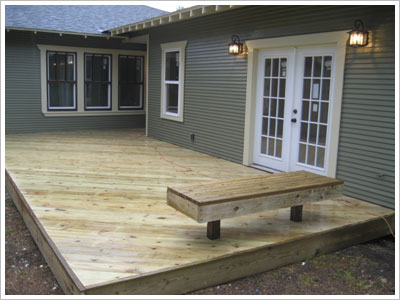 “Hurry Up and Finish So We Can Make Another Offer”

This is what the potential buyer told me Friday when he stopped by during my cabinet install. It’s the same couple that wrote the great offer a few weeks back. First time I’ve ever heard anyone say this, he’s really not shy to let me know how bad he wants it. They really love the house so I hope they get it. I passed final electrical inspection Tuesday so now we are waiting on CPS to drop the power to the new meter loop. I finished the fence, it ended up being a 4-day project with my helper and a total of 210 feet of dog-eared cedar with a rear, locking gate on the alley. Because all the cedar started to look a little “fency” I decided to go with a wrought iron driveway gate so I had my guy come and measure on Friday. After the fence I jumped right into the 30’ x 12’ rear deck project, only 2 days total to build the 360 square feet with a sweet bench to boot. When the pressure treated wood dries out for a week or so I can put some stain on it.

The cabinets arrived Thursday so I got right into hanging the boxes and vanities as well as topping out the plumbing. All that’s left for the cabinets are a few filler pieces, glass and the crown molding. The simple Shaker style with square lines really goes with the house and the wine rack adds a nice touch. All in all, I am really pleased with how my kitchen design turned out. The next major items to tackle on my list are granite slab counters for kitchen and baths, hardwood floor refinishing and A/C final inspection. I am ready to get this one done, it’s been fun but I’m feeling a little burned out from the final big push. 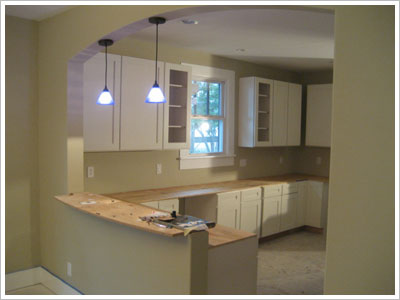 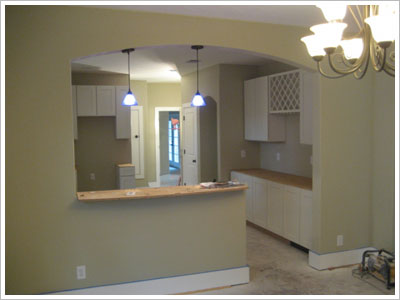 One more week until the Grand Opening of the $74.4 Million dollar Museum Reach section of the River Walk Extension Project. Here’s a great video containing a sneak peek of the new River Walk Museum Reach area and the artwork incorporated. Thousands of people are expected to be milling around down there next Saturday. We are planning a family stroll Sunday morning. 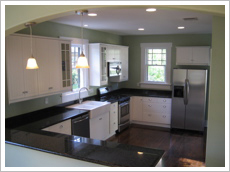 Monday started off great this week, we got another house under contract and opened escrow. (More on that later.) We’ve been getting a lot of sign calls on this house though and thought we were getting an offer but the lady who had been coming by during the rehab backed out because she bought something else. This week I put all the Frigidaire appliances in that I bought at Lowe’s. I used a stainless steel high-end digital dishwasher with the buttons on top, a 6-burner gas stove, professional series microwave/convection oven and side-by-side fridge with water and ice in the door. I also put on all the cabinet handles and installed the lazy susans in the corner base cabinets. The kitchen looks killer and is now complete! Additionally, we passed the electrical final inspection on Tuesday. All I am missing is the final on the HVAC, which should happen this week.

I also put down a pallet and a half of sod in the front yard and laid out the flowerbeds, using white limestone chop rock as a border. The front porch was concrete and very cracked and uneven as you could see from previous pictures. The area by the front door is what I concentrate on the most when it comes to attention to detail. Buyers make up their mind if they like the house as they stand there while the agent fumbles with the lockbox trying to get in. I always make sure that as you look around while standing there, you can’t see any flaws. This is why I decided to build a wood front porch cap over the existing concrete slab porch. I shot down some treated studs and laid long leaf pine tongue and groove, which is historically correct for this house. After a light sanding I used oil based stain and then came back with Cabot’s satin Spar oil base varnish in 2 coats. The finished hardwood porch looks incredible and once I add the final touch by hanging the swing our curb appeal will be done. 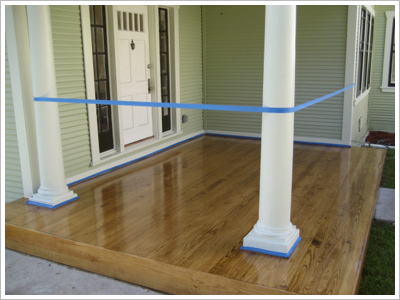 My wife and I worked on the bathroom all day Saturday. We hung the mirror, towel bar, tp holder, did some touch up painting and installed the tub faucet and a cool rain showerhead. The bathroom is almost finished as well now, just a few punch list items left. 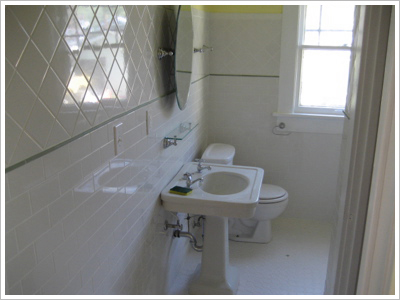 The rear of the house is almost done minus some general lawn clean up which I’ll do this week. I stained the deck today with a Redwood Tone oil base to protect it from the elements. I usually take Sunday off but since we are in the home stretch I decided to knock off one big item from our to-do list this morning but don’t worry, I still made it home in time to barbeque some hot wings and go for a swim in the pool. My self-imposed deadline is Friday to have the house done and get it in MLS for the weekend. I still have a big punch list of small stuff but should be able to get it all done this week. 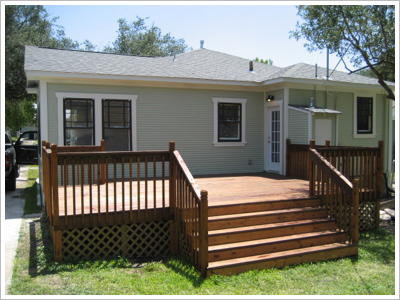 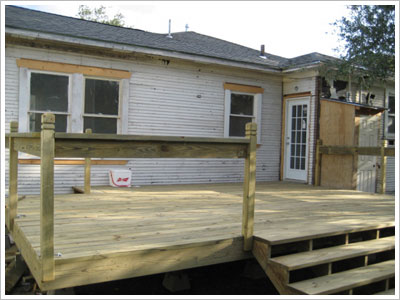 I decided to tackle the deck project this week instead of starting exterior painting. It will, after all, make it easier to prep and paint the rear of the house.

The deck is quite large measuring 20’ x 16’ with stair access from the driveway as well as the backyard. I used pressure treated lumber and screws as apposed to a nail gun.

One more day and I should be able to finish the balusters, lattice skirt and handrails making it a 4-day project. For the cost of the deck at around $1,000 in materials, This added a tremendous value to the house due to today’s indoor/outdoor living lifestyle.

On Friday I had another visit from the 2 ladies again, they loved the side lites and the deck. The potential buyer’s agent proclaimed that this house was not “lipstick on a pig” meaning that we didn’t just go in and cover up all the bad stuff with cosmetics.

After all, if you put lipstick on a pig, it’s still a pig. After seeing the hardwood floor refinish job and asking what the exterior colors were going to be they then asked if I would accept an offer now for the house and if I could be finished by the end of this month.

I don’t get emotional about a sale anymore, if they write an offer fine. If not, that’s fine too. I am confident that it’s going to turn out great and sell quickly; being in San Antonio, Texas, which is rated #2 for Recession Proof Cities by Forbes.com.