74 days after arriving home in sunny San Diego we’ve finally bought our first rehab project, The Painted Lady. I’m real excited about it, she’s a 1909 Folk Victorian Gingerbread. The house is located in an Urban Redevelopment neighborhood just 1 mile from Petco Park and Downtown, with incredible views of the Coronado Bridge and all the way to Tijuana. 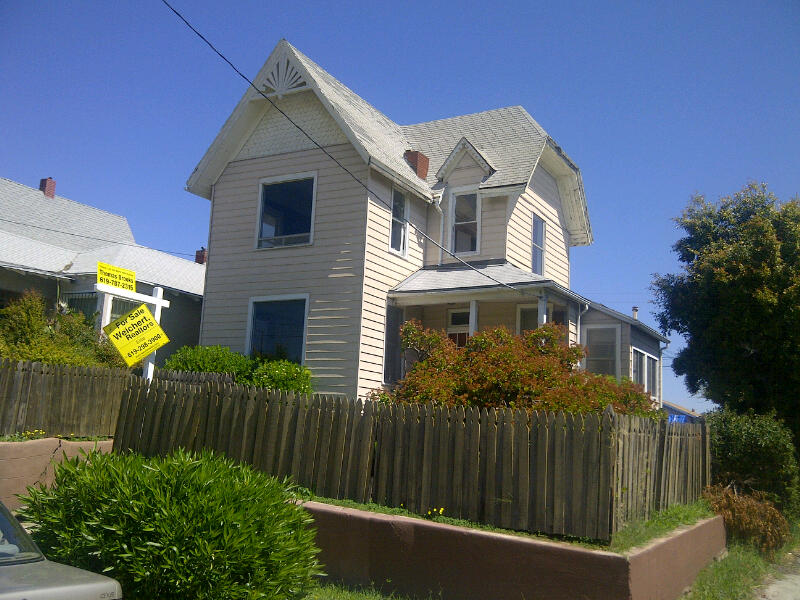 There are original hardwood floors under the carpet, 10 foot ceilings, and a lot of original details still intact. This is a huge project and needs just about everything a rehab could require. I’ll be leveling the foundation by adding a new perimeter stem wall and 40 new footings, new roof, re-framing a 360 square foot master suite on the back, replacing all the mechanicals, new kitchen, 2.5 new baths including adding a half bath under the staircase, some new windows and complete landscaping and fencing with an automatic gate on the alley. The house has aluminum siding that’s probably been on there since the 70’s. I peeked underneath it and there’s fiber shingles probably from the 50-60’s . Under the shingles I found the original wood board and bat siding which I’ll expose and also add some of the missing period details like the gingerbread ornamentation and porch decoration the Victorians are famous for.

The Victorian era began in the 1830’s and ran until roughly 1940. Our house is a Folk Victorian, more simple in design than the ornate Gothic or Italianate Victorians, and was usually built more modestly for the middle class. I’m excited to see the scalloped shingles under the gables which I’ll paint multi-color and the decorative gable bracket. This architecture can really hold color well so I’m planning on using a minimum of 6 bold colors to bring her back to life. I’ve done a lot of Craftsman style houses but this will be my first Victorian and only the second 2-story house we’ve rehabbed. With the huge scope of this project it will be a perfect welcome home project and enable me to become reacquainted with the City permitting, historical and inspection departments this summer as well as dial in my sub contractor team. If you can’t see the potential in what we have here, Google “Painted Ladies San Francisco” and you can get an idea of where I’m going with this project. Stay tuned for demo and a walk through design video!