This was the real first week inside our MCM renovation now that the concrete guys are out of the way. The first thing I did was to get my roofer started, it turned out to be a little larger job than anticipated, 3 layers of tear off instead of what I thought was only 2. I put a GAF lifetime roof on and used a lighter color, Birchwood this time. Its going to go well with my grey tones on the exterior. While the roof was getting done we also finally did the demo inside. 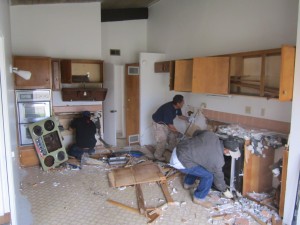 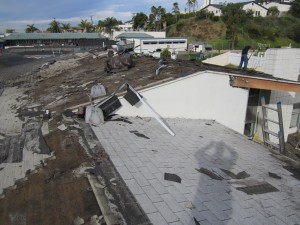 During the week I also did some minor framing changes as previously discussed. An opening between the kitchen and living room was the most dramatic but from a functional standpoint the bathroom changes were probably more important. Both bath doors got enlarged and moved over to accommodate larger vanities and I ended up vaulting the hall bath lid to give a larger feel. The wall between the hall bath and the utility room also got moved over 6 inches to make enough room for the tub with the new door opening location. I also changed all the rotten sub floors in the wet locations. All this is stuff that you’ll never see but its really more important than the nice stuff that covers it up. The electrician and plumber also got started roughing in the new mechanical upgrades, a new 200 amp service and the water heater relocation to the garage to make more room for the kitchen cabinetry. 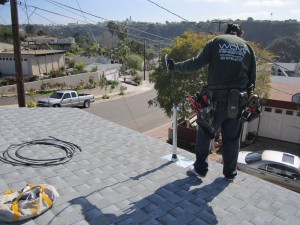 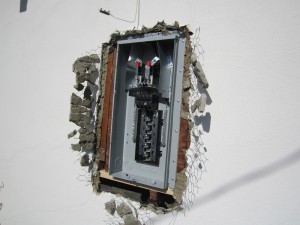 Primarily, to get the ceilings ready for my new stain I had my sandblasting guy, who normally does exteriors for stucco prep, come and blast the tongue and groove cedar and exposed beams. They came out killer now as you can see. I’m still pretty sure I’m going to go with a transparent green stain but I’ll do a test area and see how it looks. Its so clean now even just a clear coat would be cool but it might look too “rustic mountain cabin” for my taste.. 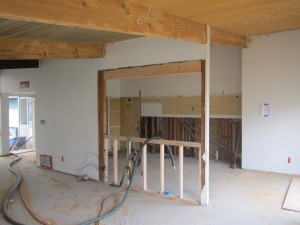 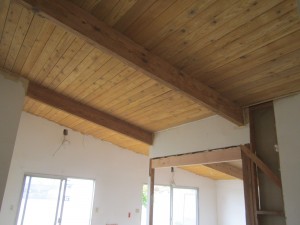 Over in South Park we had the big time survey done by Mike Curren for the site plan. This survey measures your lot by satellites down to the fraction of the inch and he marks the property lines. He also established the benchmark for grade for use on the building plan elevations. This way there is no question when we go to submit plans to the City. After playing with several floorplan options this week it became apparent we have to go 2-story to get the square footage I need as well as a garage. We also got the necessary Soils Report performed this week. I had to have a hole dug 2’x3′ and 4′ deep. Then we hired Soiltesters to come out and do the test. I was worried that because of the canyon location and slope of the lot that we could have had fill in some areas which would cause us to use deeper footings, but as it turns out the fill is only 18″ deep. The soil report will call for the new footing to be at least 12″ into native soils, which are the sandstone that is redish in appearance. You can see in the hole I dug where the soil changes color about 18″ down. This guy looks like a soil tester doesn’t he? We are still working on the floorplan, I’ll share the preliminary version as soon as we get close. Finally we get to build a house for ourselves! Thanks for following! 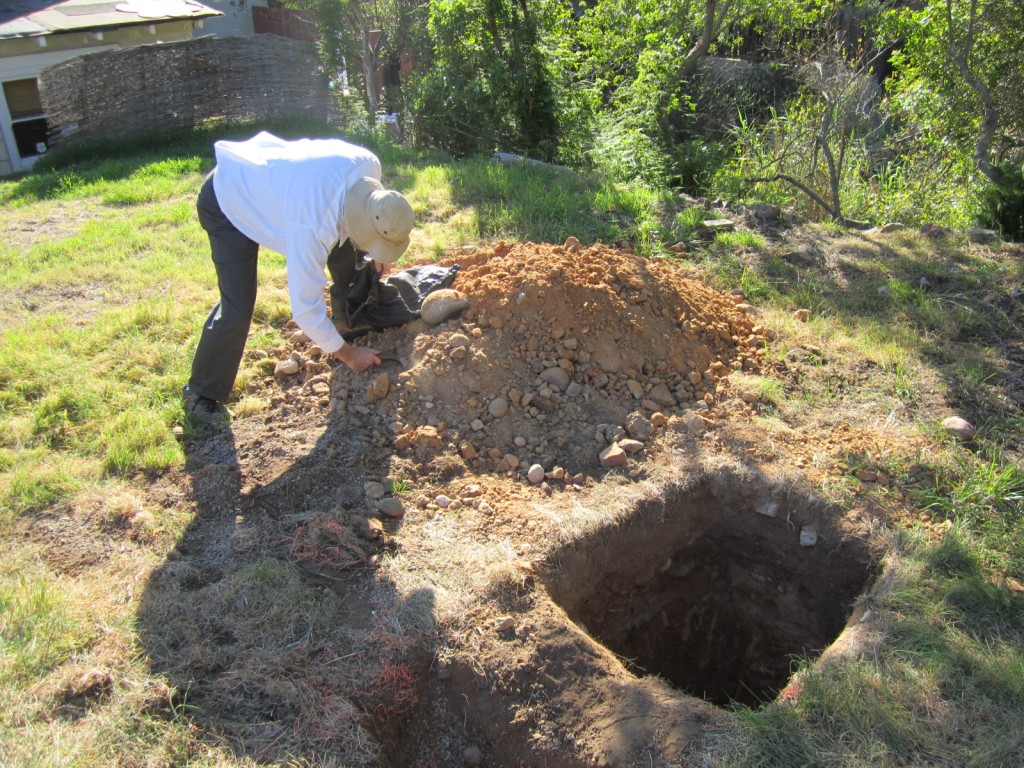