“Welcome to San Diego, Now Go Home!” This was a popular bumper sticker back in the day and I kinda feel like the real estate market is telling me this. After spending the first few weeks settling in I’m now excited to started looking at property and assessing the local market conditions. Here’s my take as an outsider just arriving. There are tons of deals here but tons of competition to boot. Several agents have showed me stuff and of course I am searching MLS daily for hours and getting to know the “new” old system. I’ve found the San Diego market to be quite energized with a flurry of seasoned investors, newbies and first time home buyers all competing for what really appears to be a limited amount of inventory. When getting in a bidding war against a potential homeowner for a MLS property you’ll likely get outbid unless its an all cash sale. All the newbie investors that seemed to come out of the woodwork, are also bidding the MLS REO properties up to a point where its difficult to make a decent margin. Some of these guys are settling for skinny profits just to try and keep their volume up. Investors are commonly using POF from hard money lenders, tying up properties with a winning bid and then going back to negotiate round two after inspections. This isn’t anything new but seems to really have listing agents’ guard up here. Local wholesalers are running around town touting their overpriced deals as well. Foreclosures at the auctions have picked up this year substantially but you have several big players to compete with who are paying up to 90% ARV minus repairs. One of these investment groups is backed by Chinese investors and bought over 350 properties in 2010, that’s more than 30 a month. Another group is doing almost the same volume and a third player has about 20 million floating in entry level houses as this has been where the easy sales lie. It was interesting to see that the San Diego Courthouse foreclosure auction is daily, not just the first Tuesday of every month as in San Antonio. That shows you the volume difference here. There are many partnerships of guys doing 5-10 rehabs a year as well and they are all competing for the same stuff.

Being in a new market certainly has its challenges, even if it is my home town. Looking back at our move to San Antonio makes me realize how lucky we were to pick a killer rehab off, right out of MLS on day 3 after arriving. Reality is setting in now, its going to be way more difficult to find juicy deals here. I’m sure I can pull it off, after all we have no choice. There are several avenues I have to chose from, one being to chase down the 3/2 bank owned properties in MLS that basically just need cosmetics like kitchen, bath, flooring, windows, landscaping and paint. With this model I would be bouncing all over San Diego County for sure. The other avenue would be continue with our specialty which is finding the inner city bungalows which are generally 1/1’s or 2/1’s and very small at around 600 s.f. and do the larger structural rehabs adding master suites to them. I viewed quite of a few of these this week to get an idea what my competition looks like. 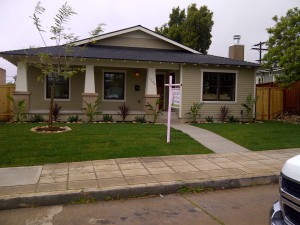 Here’s a sweet one in the neighborhood that I like. Checking out the rehabbed homes I was interested to see some of the material choices as well as paint schemes. This one is really cool and new construction but some of the other rehabs really lacked the design sense that I know help sell our houses. One rehab selling for top dollar still had some 1970 aluminum windows left in the kitchen, another had some new concrete steps blocking access to the garage and the craziest of all; the top dollar, king of the area rehab that’s now Pending for $650k probably had the worst prep job for paint than I’ve ever seen. This was new construction addition where none of the blocking between the rafters or siding was even caulked before they painted it. The eaves were raw OSB with roofing nails poking through. I was alarmed to see this quality or lack thereof on the highest comp in the area. A new friend told me I should be happy to see this, and I was: ).

The 4-5 adjoining neighborhoods that I have targeted as my new farm still have a plethora of distressed homes in them. These of course are not for sale nor in MLS. We’ve started to ramp up out direct marketing campaign or what I call “the system” that worked so well for us in San Antonio and have been pleasantly surprisedwith a 10% response rate from our efforts. Doing the big remodels will thin out the competition for me as there are no homeowners to compete with, the newbies just aren’t capable and even the big players don’t want to get tied up in a 6 month rehab because they have to keep their money moving, as its borrowed. For me this works great, we enjoy the larger projects because we don’thave to find that many deals a year and we can squeeze every bit of equity out of them by doing the construction ourselves. The big budget rehabs with big profits are where it’s at so I hope I can end up back in this model. You’re not just getting paid for adding the latest “pergraniteel finishes” but you’re adding real value and forcing the house to appreciate by the additional square footage. Hopefully this is where I’ll land but I cant wait forever to start finding them, so we might have to knock a few lipsticks down in the meantime. 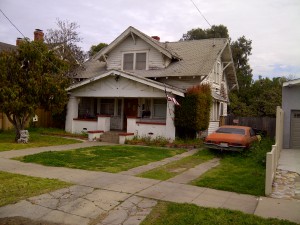 Here’s an example of the diamonds in the rough I am finding.  There are some great old houses here, its just going to take time to start getting them. If you are a wholesaler or agent and got one of these, or know of one for sale, please contact me, we pay top referral fees. With all the heavy competition here it apparently has corrupted a lot of the local agents. One Top Producing “bus bench ad” agent would not even accept a full price offer when it was Active in the computer, holding out so she could double-dip and represent the buyer as well. Other agents getting REO’s from the banks seem to magically have a buyer lined up at the same time they get around to putting them in the computer, very discouraging to see such unethical behavior. Short Sales in San Diego are all the rage, its easy to get a list of everyone who is upside down in the mortgage and then contact them and offer to help. You don’t have to be an agent to negotiate with a lender on behalf of an upside-down homeowner. Once you get a low offer accepted you sweep in and scoop the deal yourself for rehab. Being new to town I’m being very picky on what we write offers on, it’ll be interesting to see what direction we end up going. You have to stay flexible as an investor and change your strategy for the current market conditions but we aren’t giving up so quick and bowing down to a cosmetic skinny deal yet!