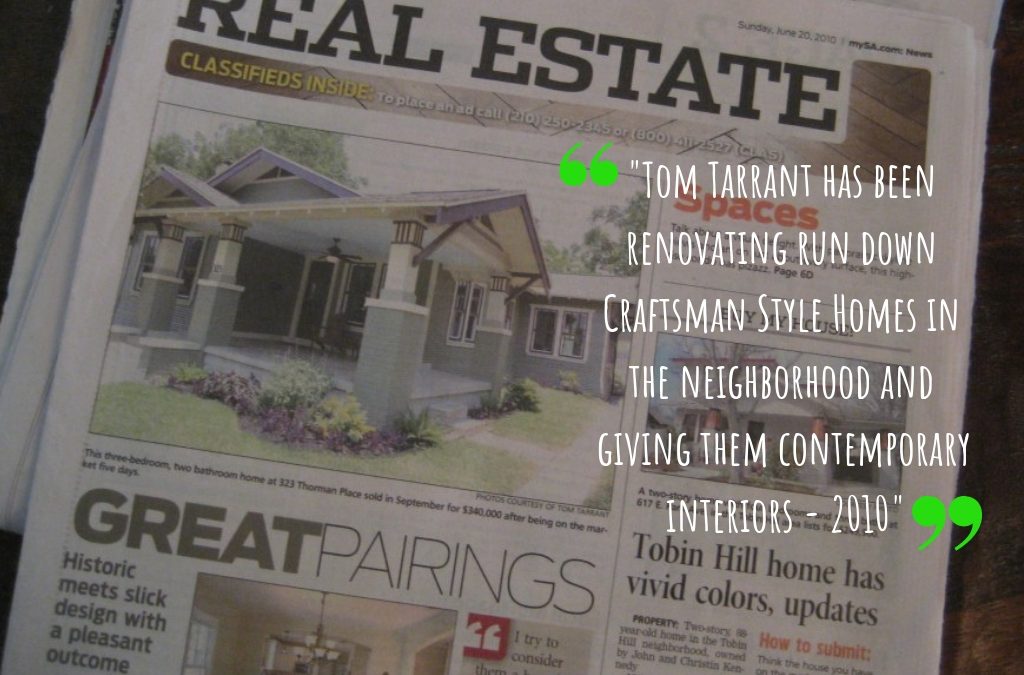 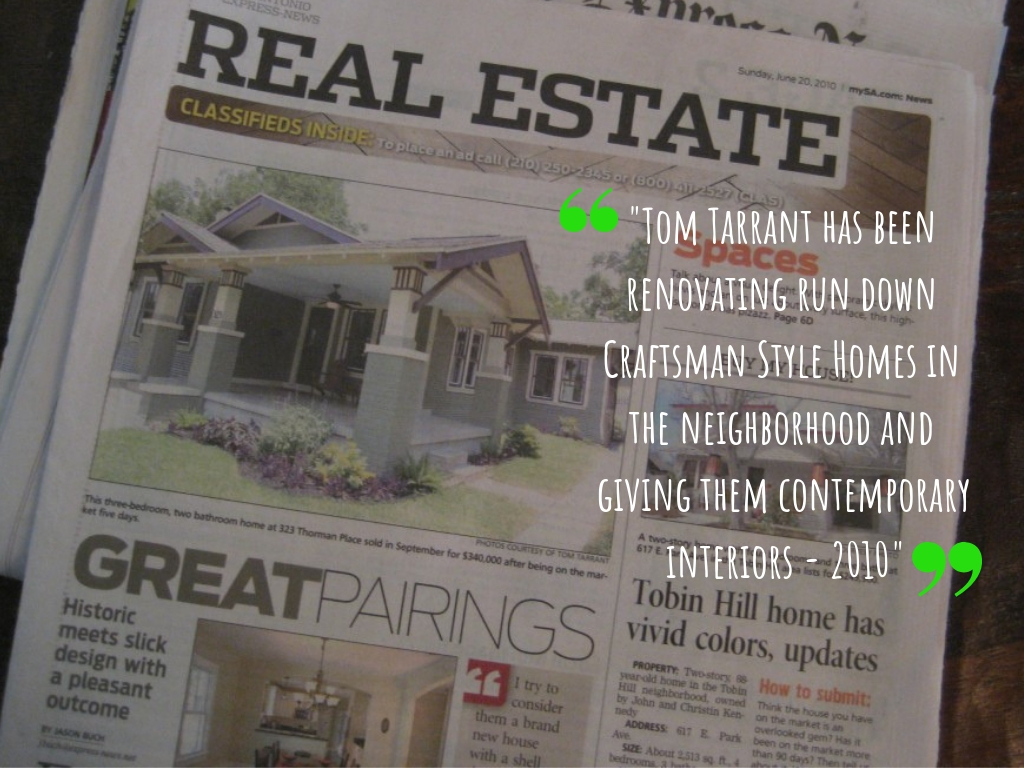 “From the joining of two unexpected, seemingly opposite mates, great pairings can happen. How about Sonny and Cher, bacon cupcakes or Labradoodles?

I was interviewed this week to take part in a story that came out today called “Great Pairings”in the Express-News about local home remodelers specializing in pairing historic homes with modern interiors and features.  As it turns out they were actually interviewing a realtor and another remodeler in the Historic King William area of town and they told him about what I’ve been doing for Mahncke Park and along the Broadway Corridor so they searched me out.

I was pretty excited to see who’s photos they used for the front page, especially when the meat of the story is really about another guy blending Contemporary architecture. As you can see our 1900 Arts & Crafts Bungalow built by H.C. Thorman dubbed Hat Trick House from last summer got the money shot. What made this house so special is the time we put in to carefully preserve the historic exterior of the home while gutting the entire interior, adding square footage, re-configuring the floor plan and offering a finish out to meet today’s most discriminating buyer.

While the article is promoting “uber-modern” interiors, we stayed somewhat true to the time period of this home with the renovation and material choices. This house got a lot of white ceramic tile w/subway pattern, White Shaker style cabinetry with seeded glass fronts and even a Farmhouse sink to keep the historic feel. While new materials like granite and stainless were still present, the kitchen didn’t look out of place after we were done.

Maybe Jason is trying to stir up his audience by using the terms historic and modern together because everyone hates seeing historic homes altered but at some point nobody wants to live in an antique either. If you want to see for yourself, here is the Contemporary Ikea kitchen in the other historic house referenced in the article. To check out the whole renovation video of my project with before and after shots, click here. 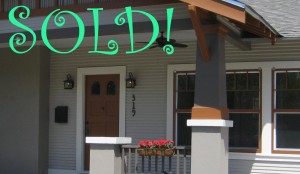 …Sold Despite All Odds

Chalk another one up for the history books. After 66 days on the market, 27 Realtor showings, 6 offers, 1 backup offer and 3 deals that fell apart , we finally got er’ done. The Neighbor’s House sold yesterday for $367,500.00. This is the highest sale in Mahncke Park to date, trumping our last record with The Hat Trick House at $340k. This is huge by anyone’s standards as theres never been any other sales over $300k. We’ll spare everyone the gory details out of respect for the parties involved since the entire neighborhood has found their way to my blog by now.  The real estate market has slowed a bit from last year in our area. Year to date there have only been 3 sales in Mahncke Park including ours while last year there were 7 by now and 12 total. Compounding the issue are the higher inventory levels this year, there are currently 13 houses on the market with an average time of 136 days, compared to last year where there was never more than 2-3 active at any given time. This was probably the craziest sale we’ve had as far as drama goes, it’s just a real weird market out there right now. We paid $150k for this house originally so this investment had a textbook spread, but dont worry it’s not all profit when you take into account the big rehab budget  that it took for the transformation.  Looking at the data would make anyone else feel lucky for selling their house but we had buyers lining up for our creation. Thanks to everyone who helped out with this great project and to Morgan at DeWitt Architects for the killer facade design and color palette. A big congratulations to the lucky buyer, we know you’ll have years of great times in the lovely home.

It’s often been said that a buyer decides whether or not they like your house within the first 30 seconds of pulling up in the driveway. What I’m talking about here goes way beyond curb appeal. We are selling house fronts my friends. Not sides, not backs, not baths, not fences and not kitchens although all that has to be dialed in as well. What sets the hook in your buyers lip is what you do up front. All those other items just help you reel them in once inside. I’ve given this advice multiple times to other flippers; you must focus on everything up front and at the door area because as the agent is typically fumbling around with the lockbox to get the keys, your potential buyer has time to really study your work. With this in mind I stayed busy this week rebuilding the missing front porch columns, they are a very important feature of this house and if done correctly can really enhance the homes other characteristics. The big front porch on this house hooked me from the start although it was missing the original historic columns. Instead of rebuilding the style it came with I opted for square tapered historic house columns to tie in with the interior columns in the dining room. The driveway was really narrow before but with my new design I gained about 18” under the Porte Cochere. You know those old Model T’s had no problem rolling through there, but the Soccer Mom SUV would definitely be a tight squeeze. Before building the new columns I had to first jack up the structure to level it and replace the 4X4 supports. The new columns are essentially cosmetic and hollow with all the weight sitting inside on the posts.

My electrician spent 4 days at the house this week as well, for those of you who are regular readers you’ll remember that he is the lead singer in a Judas Priest cover band here in San Antonio called Sad Wings of Destiny. He’s a blast to work with, not only is he a great master electrician it’s cool when he busts out singing to the classic rock we listen to all day. Adam Lambert aint got nuthin’ on my boy Rick. Thursday’s temps got to 100 degrees; in the attic it was an easy 125. I told him if I didn’t hear him singing I’d come up and check on him. It’s serious business working in a Texas attic if you are a contractor as there’s been a lot of accidental deaths, always make sure you are working with a helper in case you pass out. Total cost for complete new electrical including 200 amp service, meter loop, sub panel, 28 recessed can lights and permits: $4200.00. Fixtures not included. Another great price, this job is easily worth 8k retail. We should be calling in for rough-in inspection early next week. 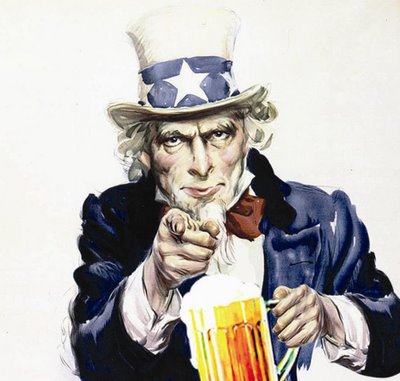 This is the last big weekend before the Federal Tax Credit expires on next Friday, April 30 so we are now in what I consider Last Call for this years hottest real estate sales period.  Undoubtedly we are pulling future demand forward as everyone looking to make a purchase this year will try and have something under contract by next Friday. As many folks work during the week , today and tomorrow will be the last chance to get out and find something. The question remains though, what will happen to the real estate market after this credit expires? San Antonio will be o.k. but I’m not sure about less stable markets.

Sellers should be extremely cautious accepting offers this week as many buyers out there are simply not qualified, even if they are waving a “pre-approval” letter, as I personally found out several weeks ago.  To get the $8000 back you just have to purchase an $80,000 house so we arent talking about the strongest buyers out there anyway. Couple that with a buyer going FHA and asking the seller to contribute 6k in closing costs sends up a red flag to me that they don’t even have the 3% to put down. Buyers not having any skin in the game simply shouldn’t be allowed to purchase a house in my opinion. It’s been said that some buyers are even tying up several properties at a time to make sure they get one that sticks so they get their free government handout. In this case the other sellers will get left out to dry with their properties going back on the market after the tax credit expires and in what could be the slower summer months. How many of these tax credit sales will wind up being next years foreclosures?

Neighbor’s House is under contract again, we had a back up offer so when the last buyer couldn’t arrange financing we went to plan b. Maybe 3rd time will be a charm, someones eventually going to be the lucky homeowner with the Coolest house in Mahncke Park.

After some last minute on-the-fly floor plan changes Thursday night from our architect Morgan at Dewitt, we finally got our material delivery Friday afternoon and my new framing crew got started. We really cut it close as she actually showed up to the job site with the new plans just hours before the framing started. These guys are very detail oriented and even cheaper than my last guy so I’m pretty stoked I found them.

Framing in San Antonio goes for about $3.00-3.50 per square foot for new construction if you deal directly with a sub contractor, in case you are wondering we negotiated $2.71 per foot for this project. In a day and a half they got the floor system done and all the walls up, all that’s left for Monday are the ceiling joists, rafters and decking.

The master has a cathedral ceiling and we are also doing a double-sided gas fireplace between the spa tub and master bedroom which are both new for us so its exciting. I’ll get the roofers over as soon as framing is done so we’ll be all “dried in” and then i can get started on the siding myself.

A Major TV production company in Hollywood that does all the good reality shows on TLC Network and HGTV contacted us this week about doing a reality show about house flipping. They found out about us evidently through our YouTube channel and got to my website.

It would be real cool to get our own show but unfortunately they are looking for someone doing a minimum of 10 houses per year, probably so they can film enough episodes. Theres been a real lack of good flip shows on TV lately, we really enjoy Flipping Out because Jeff Lewis does the larger spec deals like us and Property Ladder was always good because Kirsten Kemp the host is great and they also featured such a wide variety of different investors from pro to novice.

As far as the new Flip This House crews, Rudy in LA isn’t really doing it for us and the New Haven crew seems to be more focused now on selling courses online like Montelongo. It’s pretty flattering nonetheless to get approached anyway, maybe there will be a Property Ladder episode in our future?

We are still getting good showings at The Neighbor’s House and I feel the Spring buyers are just now getting out there now that we have great weather. In San Antonio, sales are off 4% year to date when compared to last year and inventories are slowly rising this year by about 100 houses per month.

After a closer MLS search for our general area, its apparent that there are tons more sales that are AO (under contract) or Pending right now so this figure should be improving for March.