I Love the Smell of PVC Glue in the Morning

Saturday morning the plumbers beat me to the punch. I got there at 8 and there were already 6 guys all over the place and a strong odor of PVC glue in the air. My plumber brought in a new construction crew and they roughed in the whole house with a complete new system in 1 day! Monday he’ll run the new gas line and we’ll call in for an inspection Tuesday. This week I also opened up 3 interior walls creating more of an open floorplan, doing a different kind of arch this time with square corbels on the bottom. Monday the roofers finished and he apologized for trying to raise the price on me? o.k… I also wrapped the house with Tyvek and installed all the dual pane vinyl windows after they arrived midweek. I remember about 10 years ago putting in my first set of retrofit vinyl dual pane windows in my personal home, a buddy of mine who is actually a general contractor told me not to ever use foam because it would cause the windows to warp when the foam expands. This was in San Diego where it’s always 75 and sunny and probably wouldn’t matter but here in Texas it’s the code and the homebuilders foam everything including the new construction windows inside before the drywall goes in. You want to create a tight envelope in order to be more energy efficient. With these new windows, a high efficiency A/C, roof vents and new insulation in the attic the future homeowner will benefit greatly with a low power bill. Our buyer of the Hat Trick House next door has a electricity bill in the $100’s while most other original homes in the area are paying around $300/month. Hey don’t get me wrong; I love original sashed historic windows with wavy glass, but not at $300 per month. While doing the new windows I also went ahead and also redid the wood trim because for the cost and labor saved in stripping and sanding, my paint job will come out killer now. Next up to bat will be getting HVAC and Electrical sub-contractors through the house, we’ll see who I can corral this week. We are moving at a really nice pace, I’ve scheduled it so I can be doing projects while the subs are busy without getting in their way. 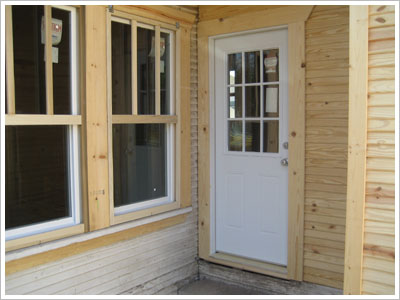 This week we had our electrical inspection for rough-in and passed. The inspector that came out was the same guy who did our last rehab house one block over and complimented us on the good work being done.

I really felt guilty for taking out the original sashed, leaded glass windows after seeing all that white vinyl earlier this week. It had to be done though as they were in such bad shape and with tons of cracked panes.

Additionally, with the room addition having new dual panes it just made sense on this house. To redeem myself with the historical gods I spent 2 days remaking wooden original replica hanging window screens.

I designed them in such a way to minimize the appearance of the white vinyl. They came out sweet and will be an important accent feature of the exterior paint job coming up soon.

I used 1×2 and 1×3 Poplar hardwood and pre-drilled, screwed and glued them. I also used the historically correct screen hangers still available from Stanley. After the screens are painted I’ll stretch the mesh behind the frames.

I also installed the pre-hung back door to the kitchen and went ahead and replaced the siding around it since I had extra left over. These pre-hung units are really easy to install, any DIY’er can tackle this project. Finally, I installed the French doors to the master bedroom so now the house locks up good at night. 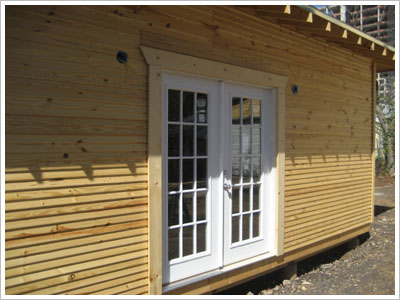 Many of our regular visitors remember the wholesale deal we offered last summer called Bungalow 2. We sold it to another investor and he quickly rehabbed it with a full crew. He did a nice Ikea kitchen with granite and stainless and added a master bathroom on it as well. After being on the market only 44 days we saw that it just went under contract. Here’s how the house looks now after his rehab. 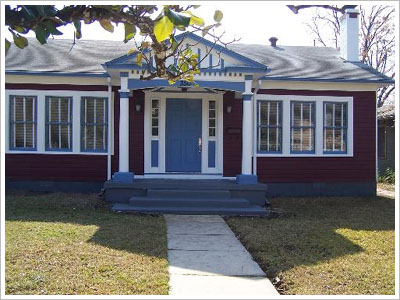 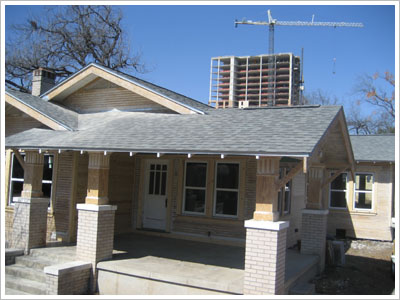 The Old and the New

As you can see I have the whole house sanded down and the new windows are in. I did all 30 windows in 1 day by myself. It’s looking really good now and it’s easy to imagine how it looked in bare wood form circa 1925 with a possible Model-T parked out front.

Looking in the near distance you can see the new 20-story luxury upscale condo building called The Broadway that’s being built just 2 blocks away. It’s the largest scale condo high-rise in San Antonio and the most expensive coming in at $500 per square foot.

The San Antonio Riverwalk Extension will reach 2 blocks away from this high-rise and our property as well. This area of Broadway will become quite swanky in the next 3-5 years with the addition of this high-rise and more on the table.

We are in good company with the builder, Mr. Red McCombs who is also betting on this area as being a good investment. Mr. McCombs is supposedly keeping the top floor for his private use while the 19th floor is comprised of two penthouses at 4 million each, one of which is already sold. 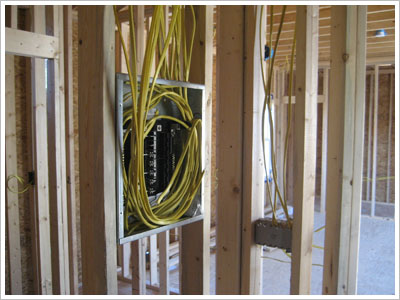 The complete electrical is also now roughed in. All we have to do is set the meter loop next week and then we can call in for rough inspection. I hired and fired a plumber this week as well, after talking him down to the price we needed he dropped off his materials and disappeared for 4 days.

He begged me to give him another chance and explained how badly he needed the work, I could only keep asking myself why wouldn’t he show up and do it then? If it’s this hard to get him over to do the rough-in then we could really be in a jamb when inspections started…better to clip this guy now.

Of course we didn’t give him any money up front so we haven’t lost anything but time. The HVAC guys have started running all the ductwork for the new central A/C I’m adding. I’ve located the furnace and coil in the attic to save space.

I am using a 4-ton, 14 seer Goodman system for this house. They recommend roughly 1 ton for every 500 s.f. of living space. Prices in San Antonio for a system like this with all new equipment, ducts, grilles, boxes and permits run about $5,000.

Keep in mind this is a builder price; retail companies from the phone book would be quoting $8-10k easy. 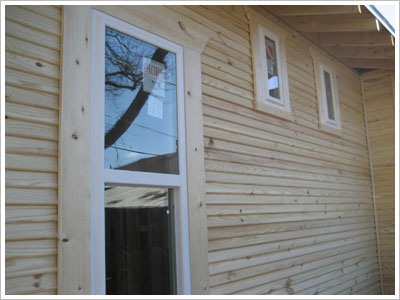 I got the siding on this week as well. I used the “historical replica” #117 siding for the whole master suite addition so it matches the existing house. I did the whole rear addition with 1 helper in a day, a big day though. It’s been pretty fun building this “new” addition in the “old” style.

It reminds me of the restoration/modified builds they do on old muscle cars these days. All old and original looking but with today’s advanced technology.