I had my framing inspection Monday and he passed me on the room addition but failed the new front porch because I had trimmed it out already and he couldn’t see how it was framed…oops. He said he would pass it with a letter from an engineer so I had to pay 300 bucks to have my engineer crawl in the attic to verify my framing was done correctly and draw up a certificate on it. I went straight into hanging all the insulation and called in for the insulation inspection Tuesday. The same inspector showed up the following day and passed me on that. Meanwhile I had all the drywall delivered. It turned out to be 150 sheets for the room addition, kitchen and existing bath. Man, prices on drywall have come down; I only paid 6.50 per sheet for 12 footers. My drywall crew hung it in a day and went straight into tape and float over the weekend. It’s coming out really nice as it’s always a cool stage to get to when you can see it all sealed up and smelling new. My drywall crew charges 10 bucks/sheet to hang, tape and float and texture. Since the existing bedrooms were not demo’ed I am retexturing the whole house so it will match. These guys are real pro; they do mostly new construction so the seams come out great. For texturing they don’t mix in a hopper, a truck with a mixing machine actually shows up and they spray the whole house with one batch so it turns out consistent. Drywall finishes and textures can make it or break it when it comes down to your final product so it’s important to get pros to do this part. In the past I’ve done small rooms myself but now that we are on a larger level I always sub this out. I also got all the wood floor patching done which included all new wood in the kitchen and I also ran it into the addition. I even put the wood floors into the master bath, which will be new for me this time and should be a real dramatic touch. With all the rain lately (6 inches in 1 night) I feel lucky that at least I’m making progress inside the house. After being in a record drought all summer now we get hammered with flooding, crazy weather here in Texas.

The local San Antonio real estate market continues to slow. So far this year we’ve had only 13,185 homes sold compared to the same period last year of 14,724 and 17,981 for 2007. Last year was the big slow down here when a lot of Realtors went starving. Things picked up a little this summer mainly due to the $8000 first time buyer tax credit so it will be interesting to see what happens to the real estate market if they let it expire. There’s a bill in Congress to raise the credit to $15,000 and open it to non-owner occupied buyers which would be great for investors and definitely clean up some inventory, but I’m not sure how we could pay for it. Foreclosures at the courthouse steps here in SA are also still rising, I ran across a Realtor friends’ house while reviewing the auction list for this month. Ouch, now that’s hitting close to home. Our strategy for this market is as always be extra careful on location, buy extremely right and offer a high quality renovation and unique product for the price level. Even with the slower market there are a lot of people continuing to move here to San Antonio and we only need one buyer. 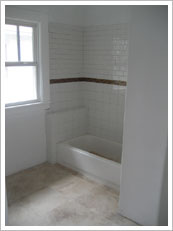 It took 4 days but I got all of the tile done minus the white grout which I’ll do Monday. I went to Daltile and opened a wholesale account to get the Arctic White ceramic because they don’t sell retail to the public.

You can find white ceramic at the big box stores but they don’t have all the special bull nosed corners necessary to do the job right. There are also 5 different shades of white ceramic tile so be careful if you are mixing pieces from Lowes and Home Depot.

I used 6”square up to the glass liner then 3×6 subway tile on top. For the floors in both baths I used 18” travertine. I spent about $900 for ceramic and $350 for the travertine for both bathrooms. We generally budget $3500 for a complete high-end bath remodel so we are in line here with this expensive tile.

I think the classic white ceramic mixed with the modern travertine and glass achieves a good balance of old and new. The cabinets are also now officially ordered with a 12-day turn around out of Dallas. 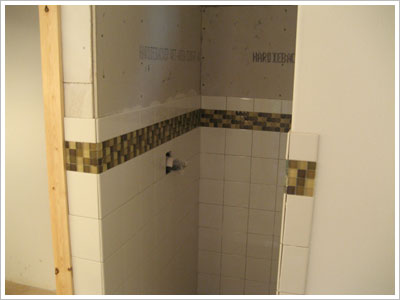 We had several new, interested parties contact us this week including a realtor representing a buyer whom had heard of us through a lady 3 blocks over.

She knows the area extremely well and didn’t flinch when we had told her our plan on listing in the 300k range and in fact she also was aware of the recent price increases in the area including the 2/1 that’s under contract for 249k without major upgrades. There is virtually no inventory in our area and it’s also helping push prices up.

We spoke about why Mahncke Park is seeing such good appreciation while for the most part the rest of San Antonio is staying flat. She felt its partly because it’s the second best choice for a historical neighborhood to King William/Monte Vista where prices are substantially higher.

I still feel strongly it’s mostly due to the San Antonio Riverwalk extension to Witte Museum and all the Broadway revitalization. Additionally, M.P. was just under priced for its location for a long time and is now just catching up. San Antonio Board of Realtors put out a press release regarding March 2009 real estate sales statistics and first quarter trends. It said sales activity had dropped by 25% but prices remain stable.

From talking to struggling agents on the front line it seems to me that activity has slowed a bit more but as one agent just told me the other day “There are just too many agents in San Antonio, all hanging on after the boom years when Californians were buying 3-4 houses sight unseen.”

Those days are gone now because investors in California and other bubble markets can get cash flowing properties closer to home and be better positioned for the next up cycle in real estate prices.

Why Is Texas Bucking the National Economic Trend?

Everyone always asks us why we decided on moving to Texas from San Diego to invest in Real Estate. Our plan was to pick a stable city to go to and flip houses while we wait out the California price freefall and then go back to invest in more rental houses at the bottom of the next cycle.

We could have picked any state in the US but for us it was an easy choice (and not to mention I am originally from Houston). In the face of National headlines delivering nothing but grim economic news, Texas is a Lone Star shining bright, a beacon of stability, growth and prosperity.

With the projected growth around the metro areas and added commerce, jobs and real estate opportunities, there will soon be a Lone Star Boom. Let’s see why everyone is talking about Texas: 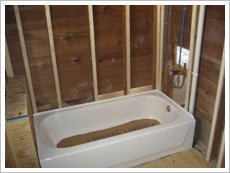 We passed plumbing this week but failed A/C inspection yesterday due to some minor details overlooked by my sub-contractor, which have already been addressed. Second mechanical inspection is set for Monday.

After passing plumbing I went ahead and installed the new plywood sub floor and set the tub in the hall bath and shower pan in the master bath. 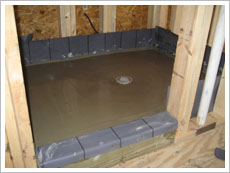 As soon as we pass the mechanical inspection I can call for the framing inspection. It seems odd and out of order the way San Antonio does it, they inspect framing after all the tradesmen have finished.

If something were incorrect you would have to rip out all those sub contractors new work, weird. So the schedule is: pass mechanical Monday. Call in framing inspection for Tuesday. 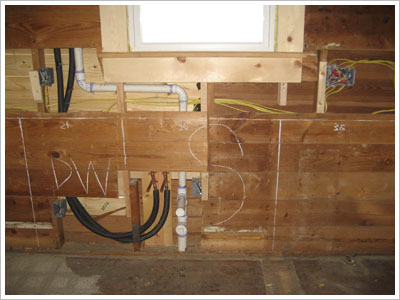 Take one last look inside these walls, next time you see the house it will be all sealed up. This is always a huge milestone for me; to see the house with all new drywall really shows how it will look. It blocks out all the “old house” smell and it’s all downhill from there, baby. 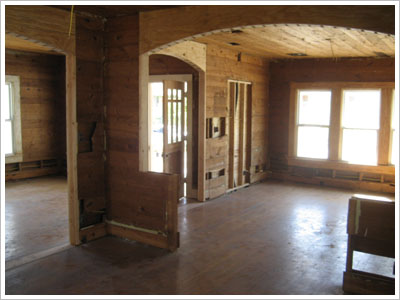 We’ve been monitoring sales activity a little closer lately and I ran some interesting reports out of MLS last night. In our little “area” there were only 9 sales in 2008, (2 of which were ours) and avg. price was 206k. In Q1 08 there were no transactions, so far this year we have 6 pending or sold. Average price on these 6 is 257k.

That’s an increase in sales activity of 600% and an avg. price increase of 19% Y.O.Y. Currently there are only 4 months of inventory making it essentially a sellers market. While the overall market has slowed down in San Antonio our area seems to be a bright spot. The Craftsman Bungalow sold for $174/s.f. last year setting a record for high comp based on $/s.f.

The avg. price per s.f. is closer to $155.00 so with Hat Trick being 1930 s.f. and the level of rehab we plan on listing it for around $289k –$299k. The only thing better than setting a high comp for a neighborhood is getting to come back and use that comp in your next sale!

2009 Forecast, Will San Antonio get Spurred while San Diego Charges?

The SABOR 2009 Housing Forecast was recently presented. They do it every year and hold it downtown in the fancy Omni Hotel conference room. All the bigwig Realtors and Builders give their spiel on the San Antonio Real estate market. Remember, these are Realtors painting this picture for us so take it with a grain of salt as with anything coming out of the NAR.

They stated the following in their presentation, which I have posted here on my site. Sales were down 18% in 2008 compared to 2007. Down 23% from peak in 2006. A bright note they claim is that inventory is not however growing.

This seems odd to me because as I drive around all I see are For Sale signs. Fewer sales but less homes being listed for sale with 17,359 units sold in 2008. Months of supply are up at around 8 but only due to the fewer sales. The average days on the market for 2008 was up to 87 and that number doubles when you get north outside loop 1604.

Foreclosures were up 23% compared to 2007. The median sales price stayed flat at around 155k. According to the head honcho’s San Antonio Prices are now stable and expected to stay stable through 2009.

The percentage price change per neighborhood can be found on the .pdf file presentation but most neighborhoods saw about 2% appreciation rate for 2008. There were reports in another earlier that SA was down 4% but that was comparing November 07 to November 08.

In a recent article from Yahoo titled 2009 Real Estate Forecast: Troubles Spread it states that some Texas cities could now also be in trouble like the rest of the US. It forecasts that Houston could drop 8.5% and San Antonio could see price drops of up to 10% in 2009.

The article then goes on to explain how severely damaged markets such as Boston, Orange County and our hometown San Diego could be reaching affordability levels seen before the boom and may level off. My wife ran across a thread on City-Data that asked all the California transplants how many of them would consider moving back now that homes were affordable and back down to 2001 prices. Honey, pack the bags and I’ll load up the tools in the truck!

As always, Location, Quality and Price will be key for our rehabs through the New Year.