We had a big week 3 on the Neighbors House project. Monday I passed inspection for my foundation so we ordered materials and went straight into framing the master suite room addition Wednesday. When laying out the floor joists I had the option to grab an extra 15 square feet by not cutting down my 16 footers and additionally we cantilevered the sills out and ended up with extra footage along the rear thus making our addition just over 700 s.f. instead of the planned 620. The framers kicked ass and got it done in a day and a half. I also had the stucco guy do the column bases for the front porch during the week. For the roof I went with my favorite 30-year composite shingle but since there were “Estate Grey” roofs on either side of this house (one being Hat Trick House) I had to choose another color, Driftwood. It’s really bizarre to flip two houses right next door to each other. Not only will I get to use my sales comp but also get the carryover curb appeal. My roofers showed up Friday and really got off to a slow start, it’s really disappointing to see someone intentionally dragging something out. Turns out the workers were being paid a day rate instead of a contract rate. After turning up the heat on my subcontractor he quickly changed their pay scale to per square pricing and they really started working, it was like I was looking at a different crew. These clock milkers had the nerve to ask me to buy lunch for them Saturday, I told them where they could go… to find the closest taco shop. The roof didn’t get finished due to the time lost so they’ll be back Monday to wrap it up. This week I’ll take care of the interior framing and arched openings and then its time to run the sub contractors through there for HVAC, electrical and plumbing to work towards the big milestone of passing rough-in inspections on all 3 of these trades. 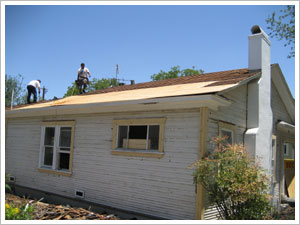 This week we roughed in all the plumbing as we had to relocate supply and drainage for the kitchen sink and the new washer & dryer location. One nice thing about pier & beam homes is that it’s relatively simple to relocate appliances because there’s more room underneath the house to crawl around and move any lines.

On Friday and Saturday we handled the roof. It was a 2 day project because we had to tear off 2 layers which included the original cedar shake shingle below. We found one more dead raccoon when we took off the old roof bringing the count to 5! After redecking the roof with plywood I chose a 30-year dimensional shingle in the color Estate Grey.

It’s always good to do the roof before you start any of your drywall repair, that way you won’t have any surprises on your new tape and float job after a rain.

You’ll notice from the photo below that I also retrimmed the windows. The electrical inspection is set for Tuesday so once that’s clear we can start hanging the drywall.